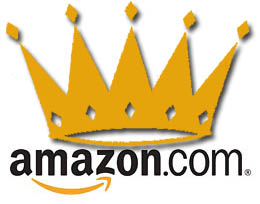 Jeff Bezos is very good at what he does. Building an e-commerce store is not hard (technically) but building a succesful e-commerce infrastructure is hard, very hard.

I hear a lot of people say: “Bezos was early, Bezos was lucky”, quit wining. Lucky… the man lost several times almost everything, most people would have quit at that point. Early… Yes, he was early, still he did it while a lot people thought he was crazy and called him all kinds of other names. Let’s just say it like it is; Jeff Bezos is one of a kind and he is an online e-commerce genius.

Most stores try to build a competitive online store like Walmart for example but they just can’t keep up with Jeff Bezos. The devil is the details. 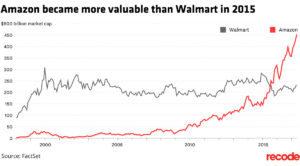 Now comes one part of the impressive side of Amazon and their sheer size in America. This chart shows how Amazon competes against ALL S&P companies department stores. 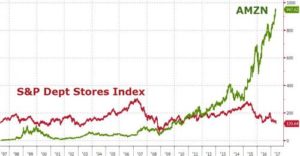 Now comes the impressive part of Amazon’s journey since their founding. Amazon literally owns 1/3 of the United States e-commerce market. 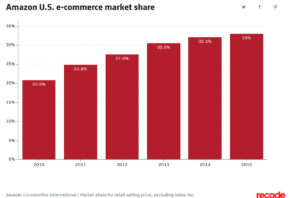